"every artist has an attic" this is the title of a screenprint by retired ttu professor of printmaking lynwood kreneck. sadly, i couldn't find an image. it's a very clever print, showing partial and complete artworks by famous artists throughout time strewn about an attic; the influences in the neatly jumbled mind of an artist. the following are a few images stashed in my attic: 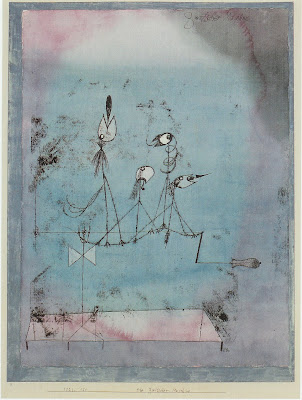 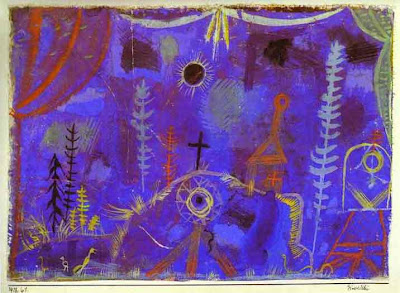 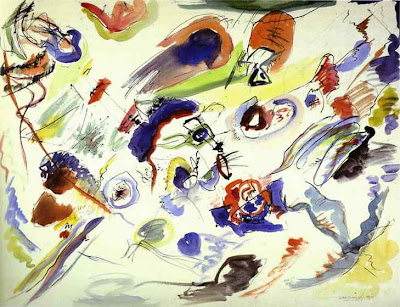 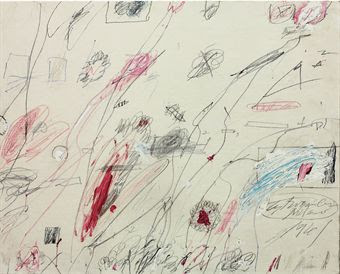 cy twombly images found here and here (notice the second is for sale...you have $1,338,351 lying around to buy me a christmas present, right? i've been a very good girl.) 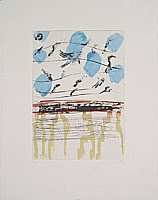 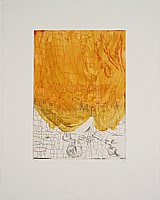 per kirkeby's prints, both "untitled" from 2003 found here. also for sale. {ahem} 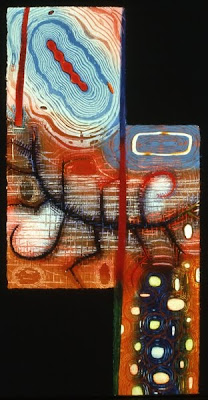 the woodblocks for this beauty were on display in the printmaking lab at wake because my professor, david faber, helped to print the image during a workshop. i drooled over them every classperiod. someday i'd like to meet her.
i was going to tell you why i liked each of them, but for each one i started writing, the color! the line! the immediacy of the mark-making! delicious! and so, well, there ya go. but even more, i like them because they go beyond what you see to address deeper ideas (remember how artists think?) klee, for instance, manages to merge the monstrous with the playful, addressing industry's horrors and atrocities with childlike honesty and sincerety. twombly's works use line, texture and color (or lack of) very poetically and are often references or responses to literary sources. per kirkeby's abstractions are reminiscent of the danish landscape he grew up around and, likewise, kunc's abstracted landscapes are "interpretation and contemplation on larger issues of the eternal life struggle, of endurance and vulnerability, growth and destruction." (source) and of course, i'd be remiss if i didn't mention my former professor, terry morrow (who defies all links). he helped shape the artist i am today.
Posted by annie at 9:00 AM 1 comment: Links to this post

quote of the day

"harry potter 7 was lame; the werewolf didn't even have abs." -smashly

if you didn't, you're behind because now you have to read hunger games AND watch hp7. you'd better hurry before hp7.2 and hunger games the movie are released. i don't accept late work.
Posted by annie at 4:31 PM 6 comments: Links to this post

i went to the midnight showing of harry potter 7. how did i deal with the aftermath of staying up all night? well...i slept in till 6:30 and didn't wear any make-up. i thought i covered my exhaustion fairly well till one of my students asked, why do you look like you're sick? {sigh} it was totally worth it. so worth it that i went to see it again friday night.
Posted by annie at 4:47 PM 5 comments: Links to this post

i'd like to start this discussion with some insights of my own, but for now, since there are projects and tests waiting for my red pen and it's already after 10, i must do what i've forbidden my students to do - paste in a really long quote with a few of my own thoughts. ben showed me this excerpt from kurt vonnegut jr's breakfast of champions. i'm not really sure what the novel is about at all, but in it, a town buys a piece of modern art for $50,000 from a minimalist painter. it's described thus:
The original was twenty feet wide and sixteen feet high. The field was Hawaiian Avacado, a green wall paint manufactured by the O'Hare Paint and varnish Company in Hellertown, Pennsylvania.** The vertical stripe [a thin stripe a few inches from the left of edge of the panel] was day-glo orange reflecting tape. This was the most expensive piece of art, not counting buildings and tombstones, and not counting the statue of Abraham Lincoln in front of the old...high school. ...
Midland City was outraged. So was I.
***
I did not expect Rabo Karabekian to rescue me. I had created him, and he was in my opinion a vain and weak and trashy man, no artist at all. ...
Listen:
"What kind of a man would turn his daughter into an outboard motor?" he said to Bonnie MacMahon.
Bonnie MacMahon blew up. This was the first time she had blown up since she had come to work in the cocktail lounge. ... "Oh yeah?" she said. "Oh yeah?"
...
"You don't think much of Mary Alice Miller?" she said. "Well, we don't think much of your painting. I've seen better pictures done by a five-year-old."***
Karabeckian slid off his barstool so he could face all those enemies standing up. ... "Listen--" ...
"The painting did not exist until I made it," Karabeckian went on. "Now that it does exist, nothing would make me happier than to have it reproduced again and again, and vastly improved upon, by all the five-year-olds in town. I would love for your children to find pleasantly and playfully what it took me many angry years to find.
"I now give you my word of honor," he went on, "that the picture your city owns shows everything about life which truly matters, with nothing left out. It is a picture of the awareness of every animal. It is the immaterial core of every animal - the 'I am' to which all messages are sent. It is all that is alive in any of us - in a mouse, in a deer, in a cocktail waitress. It is unwavering and pure, no matter what preposterous adventure may befall us. A sacred picture of Saint Anthony alone is one vertical, unwavering band of light. If a cockroach were near him, or a cocktail waitress, the picture would show two such bands of light. Our awareness is all that is alive and maybe sacred in any of us. Everything else about us is dead machinery.
"I have just heard from this cocktail waitress here, this vertical band of light, a story about her husband and an idiot who was about the be executed at Shepherdstown. Very well - let a five-year-old paint a sacred interpretation of that encounter. Let that five-year-old strip away the idiocy, the bars, the waiting electric chair, the uniform of the guard, the gun of the guard, the bones and meat of the guard. What is that perfect picture which any five-year-old can paint? Two unwavering bands of light."
even taking into account that vonnegut is probably making fun of minimalism and the idea of reducing life to vertical bands of light, i still think this is a beautiful defense of artists who work nonobjectively. and it describes perfectly why i love it: because it strips away everything that is unneeded and presents to you thoughts in pure form. because {most} artists actually think about what they're doing. because art is a process. because it's visual poetry.
maybe someday i'll speak more poetically or at least coherently about this. and perhaps post some of my own work that a five-year-old could do better than. maybe.
*this could be part i of many or part i of i.
**hellertown, consequently, is right outside of allentown, the man's (formerly known as the boy) hometown.
***if i had a dollar for every time i heard this argument, i'd be a very very rich woman.
Posted by annie at 9:30 PM 7 comments: Links to this post

i woke up this morning with a zit on my lip. it was ripe. so i squeezed it. turns out it was (is) another cold sore. i believe i've angered it.

i woke up this morning not wanting to do my hair. turns out it {kind of} fits in a ponytail for the first time since 2007.

i woke up this morning not too excited about a certain institute activity tonight. turns out, outrageous polyester plaids can change a girl's perspective.
Posted by annie at 10:19 AM 3 comments: Links to this post

so i keep on postin over at the peanut gallery. read my latest post here. and have a nice day :)
Posted by annie at 12:12 PM No comments: Links to this post