i have nothing to say for myself...

don't get me wrong, i LOVE to travel. i just seem to have trouble with TIME. the last several times i've ventured out of the greater dc area, i've almost missed my transportation back. it started when i went to buffalo for christmas to visit my sister and her hubs and 2 kiddos. i got there just fine, but for my return flight, the self-check at the airport wouldn't recognize my reservation. after a few puzzling swipes of all my credit cards yielded the same results, the attendant took my name and informed me that i was at the wrong airport and that, no, she was not joking. she kindly booked me on the last seat of the flight leaving from rochester (where i'd made my poor relatives drive for an hour, instead of buffalo, which was about 10 minutes away) and didn't even charge me.

the next day i adventurously took the chinatown bus to philly for the new year. after a low key new year's eve and a day of showing me around, chris and i were rather hungry. we wandered around chinatown looking for the "good noodle" place that chris vaguely remembered, finally settling instead for a touristy, but decent alternative. it was fast, but not quite fast enough. he only just managed to get me to the last chinatown bus back to dc. but i was on the bus; no damage done.

over the fourth of july, i dawdled at my sister's hotel room before catching a cab to meet my friend mary on the train to jersey. my cabbie was less than pleased with the 20 minutes i gave him to get me across town and dropped me at the wrong station. upon discovering his mistake (an innocent one, though i've made it sound malicious), i booked it the few blocks to penn station and made the train with literally seconds to spare. (i then had to dodge the conductor while i looked for mary, who'd called when i had 11, 7, and 3 minutes to departure but was still en route, and offered to buy my ticket. bless her.)

in october, after a relaxing lunch and stroll around times square with my sister, i put her in a cab and told her i'd wait till she was off to make sure there weren't any problems. i then checked my watch and gave her a quick hug before sprinting several new york blocks with my luggage in tow to catch my bus. in addition to being sweaty, out of breath, and a bit frantic, i was berated by a bossy ticket-taker for being late.

this all in the last year.

so, to make sure i didn't screw up my thanksgiving flight (BOTH of my sisters would be in buffalo, woo hoo!), i left work at 1:30pm for my 4:30pm flight. i arrived at the airport at 2 and realized that i had no idea which airline i was flying. i went to two separate airlines' check-in kiosks and had to call 3 people to hack* into my gmail to find my receipt, only to realize that i was FOUR HOURS EARLY for my flight. that's right. somewhere in the 6 weeks between booking my flight and leaving myself a digital reminder, "leave for flight at 4:30," my brain had changed the note to "leave for 4:30 flight." oy. i guess it's good that i was so early because i was at the wrong end of the airport for my airline. after checking in (at the correct kiosk), i managed to circle around BACK to the other side of the airport, wondering why one must check in at one end, and then hike back to the other for the gate, which was right across from a separate airline (one to which i'd previously attempted to check-in). i chewed on this while i chewed leisurely on my lunch. about an hour later, as i got to the front of the security line, i finally realized that i was supposed to be at gate 4, not 40 and that the northwest check-in was in fact very near the northwest gates. the tsa guard confirmed my idiocy. so AGAIN i trekked around to the other side of the airport, whizzed through security in about 10 minutes (after knocking someone's blackberry to the floor - oops, my bad!) and still had over an hour to spare.

it was totally worth it though. pictures coming soon...

*hack being used very loosely, considering that i gave them my login and password.
Posted by annie at 7:57 PM 8 comments: Links to this post

i am not ashamed

i'm going to the midnight showing of twilight tonight. and i'm excited. i apparently have the mentality of a 14-year-old girl. so what?

and now my question is...

are you an edward or a jacob?

this is important, people. i mean, our friendship survived the election, but this...this is CRUCIAL.

choose wisely.
Posted by annie at 10:47 AM 8 comments: Links to this post

so i discovered that the mint tea i've been drinking every morning and all day every day is actually black tea with mint leaves, not herbal tea. no wonder i didn't have dc withdrawls. now i am, though. and chocolate withdrawls, too.
Posted by annie at 5:47 PM 3 comments: Links to this post

what i did at work today

don't worry. i typealyzed all of your blogs, too.

oh and some of this, too

abby's birthday post is here. i didn't know it would post on the day i started it rather than the day i finished.
Posted by annie at 8:47 PM 14 comments: Links to this post

i did. i got chills when they announced it. and i just watched obama's acceptance speech and teared up right here at my desk. (what? there was something in my eye...) i am thrilled to have an intelligent, eloquent, inspiring president again. i know he won't be able to keep all of his promises; that's just politics (and life), but today i'm optimistic about my country's future and my president-elect's ability to affect change. for the first time in 8 years, i'm pleased as punch, tickled pink (well, blue) and downright proud to be an american. (hopefully my roommates will still speak to me...maybe over bbq.)

see mccain's concession speech here. i hope that i would be as gracious if my candidate had lost.
Posted by annie at 8:21 AM 19 comments: Links to this post

Labels: i rock, whip it

i've never been one for politics or political discussions. i have my opinions, usually based on something i've read or heard, but more often a gut feeling, which is kind of hard to defend in a political discussion, particularly if you can't remember the sources of what you've read and heard. anyway, i've enjoyed following the various discussions amongst our families' blogs and thank you all for sharing your opinions, enlarging my scope of understanding and educating me on both sides of the issues. you rock.

until recently, i was one of a handful of moderate liberals living in a blood-red-if-you-even-think-about-democrats-you're-probably-going-to-hell state. a state in which, casting a vote for a blue candidate did as much good as writing in jack bauer. (i still think he'd make a good president.) BUT. now i live near the d of c, in a battleground state, no less. i couldn't help but get swept up in the passion of our nation's capitol. and i'm excited, nay, thrilled to the core to cast my vote and have it actually mean something. (please, spare me the old you have to make your voice heard, your vote always counts, blah blah blah.) i'm even excited to stand in the rain for 3 hours to partake in said civic right. i have read, watched, listened, researched and discussed. i know the candidates. i know who i will vote for. i feel good about it. and now, in less than 5 hours, i will whip it. whip it good.
Posted by annie at 9:49 AM 15 comments: Links to this post

one of my favorite memories of home is of us girls sitting around the sunlit kitchen table, each with a 32 oz of that sweet sweet nectar of the gods from our most recent maverick run and a book of sudoku puzzles, just jawin and jokin away.  abby's like that. she's at ease with and can talk to anyone and make them feel comfortable, too. she has a fantastic sense of humor, SO much personality and a witty way with words. and she can rock a russian accent. she's a natural leader. and she has a depth and spirituality that never cease to amaze me. (sometimes i think i cut in front of her in the sister line. i'm pushy like that. i woulda done it. but this is about abba...)
so, in honor of her birthday, nearly a week ago, here are some bits of randomness that i love about her (though definitely not even close to all or nearly enough bits)... 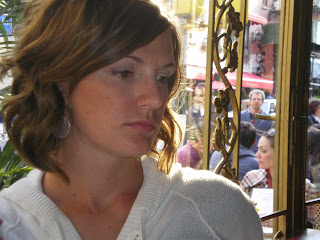 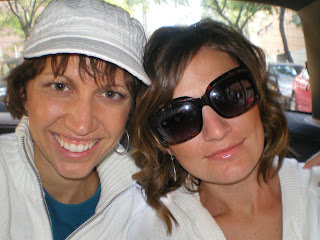 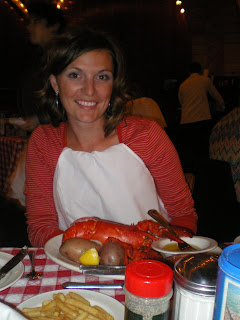 like t-shirts and lobster and tops of spice bottles and checkered tablecloths... 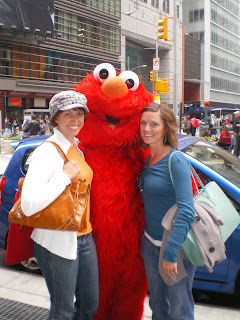 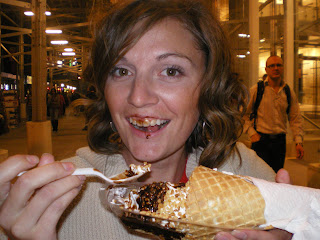 she eats (and still looks like a rock star). and lets me take silly pictures. and post them on my blog. and she doesn't get mad (right, ab?) 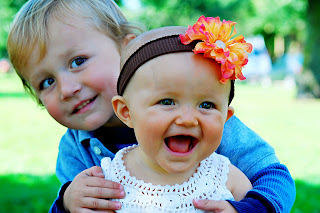 she prob'ly has the cutest kids in the universe.
and she's a kind, patient, loving mother to them. 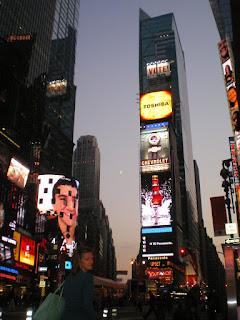 so, rock hard abs,
i hope you had a happy halloween
and an even better birthday.
love,
your sister
(annie)

Posted by annie at 9:46 AM 2 comments: Links to this post