it aint' nothin but a g-thang

this post alternately titled, what i did at work today - part four. or five. or whatever.

on a whim, i decided to play softball for the sidley sluggers, part of my firm's summers program. i put my name on the sluggers email list and proceeded to miss every game until last tuesday. they needed another woman or they'd have to forfeit. title nine rules or something.

because i can catch and throw, they stuck me in right field...a safe place to stick a girl in the outfield, right? paul, who, consequently will be freddo's t.a. this fall, played right center and told me, "if it comes near you, go for it and i'll back you up."

just checking. i thought maybe i'd heard wrong. a guy who will actually let a girl field the ball all on her very own? i don't mean to be sarcastic (except i do), but that's craziness. his wife should know (and i'm sure she does), he's a keeper. not wanting to let paul down, and playing for the reputation of pseudo-athletic girls everywhere, i dutifully paid attention. coach klazkin described the game as "an epic thriller that will likely go down in Sluggers history" but it was pretty boring in right field. i guess i shouldn't complain. i mean, i DID move around a lot. i smacked my fist in my glove. i squatted in ready position, trotting forward when a woman was at bat and jogging back again for the men.

despite the boredom in right field, the game was definitely a nail-biter. we defended the diamond well, with a double play and some spectacular outfielding. and we were true babes at bat. but just when we thought we had the game in the bag, "back-to-back-to-back fielding errors allowed the contract killers back into the game, as they put up 5 runs in the top of the 7th." another friend and fellow legal assistant, josh, threw his glove across the field in disgust when we finally made our third out. he's a little intense.

to keep from being throttled by said glove-thrower, we rallied. as coach wrote, "With 2 outs in the bottom of the 7th inning, reece hit the game-tying single to put the game into [an extra] inning. And finally after a game saving, diving catch in right field by rookie sensation ann gedicks, the sluggers were primed to take back the game in the bottom of the 8th."

wait. let me run that by you again. "...after a game saving, diving catch in right field by rookie sensation ann gedicks..."

did you know i'm a rookie sensation? me neither. but hey, i can't take all the credit. i had help. paul was true to his word and let me field the ball.

anyway, we managed to pull out the win. you should know that when we play extra innings, we play one pitch rules, meaning each batter gets only one pitch. (i know, right?) if it's a ball, you walk. if it's a strike and you don't hit it, you're out. imagine my stress as i walked to the plate, with one out already against us. i knocked out a single, made it to second on a walk and actually scored the winning run when the contract killers bobbled an infield single. "when asked about her amazing and game-altering 8th inning catch in the field, gedicks humbly replied, 'ain't nothin' but a g thang.' " 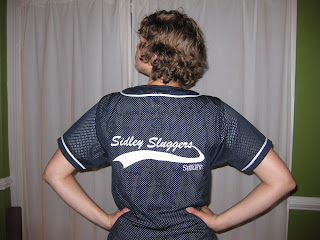 (i need a haircut)

[note: coach klazkin, a friend and fellow legal assistant who played ball in college, creatively writes up each game to rally the team and entice more players to the field for the next week's game. there's a bit of a contest to see if you can get in the write-up and which song lines he'll use as your quotes. i wanted to wholly rip off his entire article, but...well, i work for lawyers, so i just quoted. pretend this is a footnote.]

i'd like you all to know that running and i got back together. maybe you didn't know we were on a break. (i didn't want to complain.) we were pretty hot and heavy for a while, but whenever we went out, i just felt like i was gonna explode. and each new date brought some new annoyance or source of pain. some say i was too demanding, that i was pushing too hard, trying to go too fast. we tried various counselors who fit us with new shoes and adjusted our backs. we even tried massage together, but to no avail. it just wasn't fun anymore; the rough patch continued. frustrated and exhausted, i called it off to explore my options: i swam, i cycled, i danced, i slept, but i still wasn't happy. my relationships with these others felt shallow; they weren't fulfilling. they just couldn't compare to what i had with running. i realized that nothing really gets me goin, makes my heart flutter or stomach squirm (in a good way?) like running. so, last night, i asked running to take me back, left my watch at home, and ended our brief cooling-off period. we had a lovely time together. 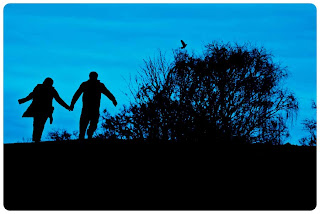 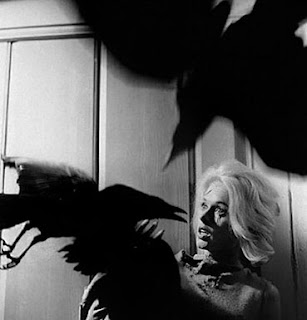 i've always thought birds were a little bit creepy. i mean, they just look mad all the time.
in elementary school, my friend molly had a pet parakeet that she'd, more often than not, try to get me to hold. she'd open the cage and he'd step delicately onto her finger until she brought him out. then, freed, he'd fly up to the corner of her bedroom, fix me with a beady stare and dive straight for my head. i think she thought it was fun. but i always ended up a nervous wreck, worried that he'd peck my eyes out.
during our lunch break from TA orientation at tech, a group of other arties and i sat under some lovely trees to munch. something dropped onto my head and reached up to brush whatever it was out of my hair. but instead of a twig or acorn or piece of bark or dried leaf or beetle, my fingers smeared in warm, moist goo. in my hair. a bird pooped in my hair. it's supposed to be good luck in some cultures. i just thought it was gross.
one time, at art camp,* a sparrow took up residence in the eaves of my cabin and whenever i walked by, he dive-bombed me. i had to run with my arms flailing above my head to get to my car.
so when i started playing with the metaphor "killing two birds with one stone," to represent how much i had to do (the birds) and how little time i had in which to do it (the stone), it seemed to fit.* like a glove. a white sequined one. particularly when all of my metaphorical birds turned and dive-bombed me, pecking out my eyes and pooping in my hair. i think one of them actually built a nest somewhere in there cause i can hear it chirping still.***
*technically it's a graduate summer program, but we all call it art camp.
**i know i know, usually this is a metaphor for getting stuff accomplished faster because you're doing 2 things at one time.
***the partner i was pulling all this overtime for suggested several times that i take today off or at least leave early. then he gave me more work to do.
Posted by annie at 9:23 AM 5 comments: