that i started school today?

that my last day at sidley is october 1?

that i ran a 10 mile race yesterday?

that i hiked 167.7 miles with my pops earlier this month?

that i'm one of the "featured artists" at the studio?

that i'm going to see the killers tonight?

that i'm kind of behind on downloading pictures and posting?

that i like peanut butter on crackers with raisins? and pecans? and almonds and honey?

that the above is pretty much all i have left in my cupboard?

that i'm "going private" and i need your email addresses?

that i'm going to expound on all these topics maybe?

that i need to know which one you want to hear about first?

that i'm starting a new blog?

that i'm in the market for some plastic pants?

i did mention that?
ok just checking.
Posted by annie at 1:47 PM 13 comments:

i'm currently, as you read this, if you're reading it between august 1 and 12, hiking a section of the appalachian trail,* which i've been spelling wrong for the past 2 years. and i love it. the trail, not my spelling problems. like, really really love it. yes, maybe i will marry it, thank you very much. i don't really know, exactly, why i have this love affair with backpacking. it's a combination of things, i guess. i like the idea that i can carry everything i need to survive (at least for a few days) on my back. it really throws "needs" and "wants" into sharp focus after you've lugged them up and down a few mountains. one outfit. underwear and socks for the number of days you'll be between towns. one set of rain gear. a map. a very lightweight camera. food. water. fire. baggies. duct tape. anything else is added weight. and let me tell you, those ounces add up fast. and they get heavier and heavier. 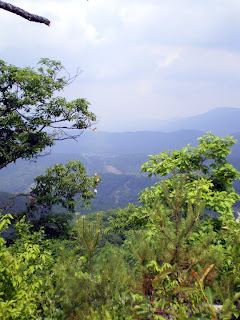 your worries, too, become a matter of survival. it's no longer, what shall i wear to work today (one outfit, remember?), it's how many miles will i walk. where will i rest. when do i get to eat again? all those daily stressors sluff off and fall by the side of the trail and you realize how silly and unimportant they are, especially if you have eggs to sit on. 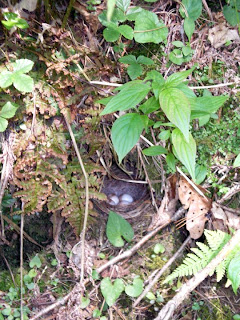 it's a good time to sort things out. i come back feeling lighter (literally and figuratively), refreshed and rather smelly. 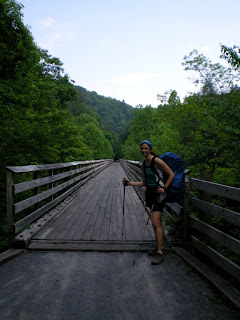 (my one outfit.)
there's a surprising culture on the trail that i've grown unaccustomed to in the city: hikers are nice. and honest. and take care of each other. even strangers. a small example: on my last trek, i lost a filtration water bottle. not super-expensive, but valuable to a hiker. the next day back on the trail, i discovered it was missing. having walked down a mountain and all around town, i knew it would take too long to retrace my steps, and i was NOT going back to the top of that mountain. i told some friends about it at the next shelter. they'd seen it. someone had found it at the top of the mountain, carried it into town and attempted to find its owner. when it went unclaimed, he left it in a "hiker box," curiously enough at the motel at which i'd stayed and the only place i hadn't checked in my search for it. someone else whipped out a cell phone and called the motel, who shipped the water bottle to my home. nobody asked for compensation. 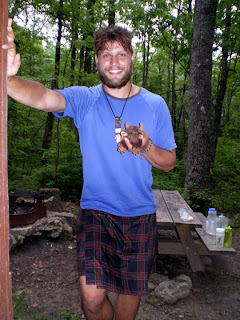 this year i'll be trying a skirt like this guy, but not plaid.
(he was one of the water-bottle-finder-helper-guys...and his little moose too.)

two words: trail magic, or "assistance from strangers through kind actions, gifts, and other forms of encouragement. trail magic is sometimes done anonymously. in other instances, persons have provided food and cooked for hikers at a campsite." (thanks wikipedia)
these persons are called trail angels. trail angels rock. these two showed up unexpectedly several different times on our last trek with deliciousness: oreos and ice cold coke. mmmm. 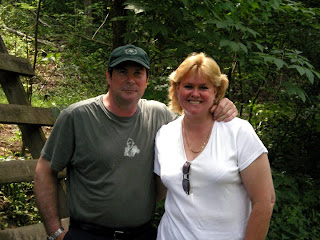 it's especially refreshing after you've had to deal with stuff like this. 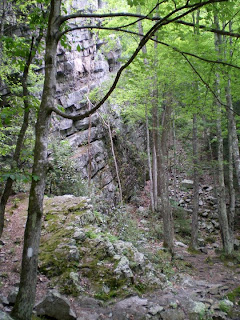 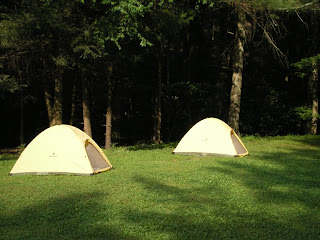 and, finally, i like the hike cause i get to hang out with this guy. 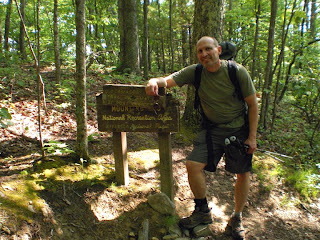 maybe in a few years i'll post pictures from this year's hike. until then... 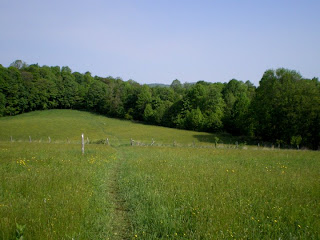 *i will not accidentally-on-purpose end up in argentina. stop asking. it wasn't even funny the first time. (stupid governor)