the tale of two engagements

it was the best of times. it was the worst of times. it was really just stressful times involving some art show preparation, some substitute planning, a road trip, a lecture, a demonstration, a van ride, some really gorgeous picassos and one really great boyfriend who drove, carted my stuff around for me and generally kept yours truly cool and collected, if not completely calm. (how's that for a sentence that never ends?) 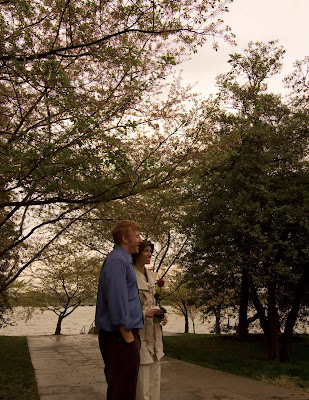 okay okay, i'll get to the good part. monday morning after most of said activity had gone swimmingly, thank you very much, i was frantically trying to finish up some last-minute framing for a show opening later that night. things were not going well. i texted ben and voila, he turned up at my studio with a rose. thinking he had decided to be late for work in order to cheer me up, i gave him a big hug and blathered on about my woes. i have a question for you, he said rather seriously. what, i said, not very kindly, steeling myself for the worst. next thing i knew, he was on one knee with a ring - this ring - in his hand. he cut right to the chase, "will you marry me?" a much better question than anticipated. i said yes immediately. we hugged. we kissed. we kissed some more. when he finally got it through my thick skull that he wasn't going to work, we finished framing my works and delivered them to the gallery. *perfect* proposal. 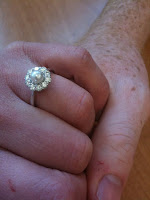 (after seeing this picture, i decided to give up my lifelong dream of hand modeling)
over our celebratory lunch at mcdonald's (he wanted to get sushi at our spot near my studio, but there wasn't time) he mentioned that he hoped i wouldn't be let down when i discovered his original plan. there was a powerpoint. and tshirts. the strike force might be disappointed, he said. 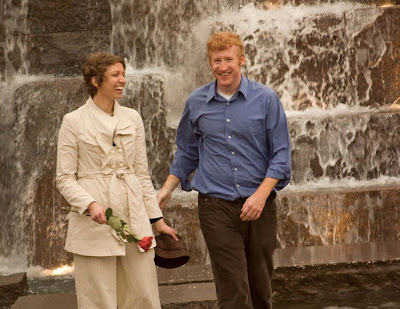 (he's too sexy for that shirt)
wait. wait wait wait. tshirts? powerpoint? STRIKE FORCE?! i had to know. he wouldn't tell me everything, but we agreed to go through with the original plan the following evening. we managed to keep it a secret from the entire force except for two, who gamely haven't told us exactly what dorks we really are. 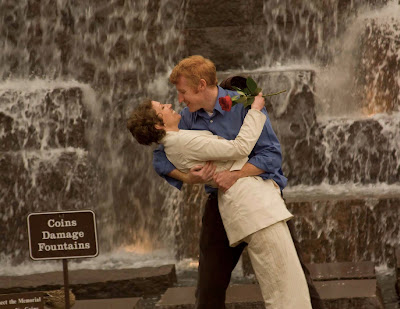 so after work, we took a walk down to "our spot" on the tidal basin, near the roosevelt memorial. it was a beautiful day, a bit blustery, but the cherry blossoms were still out and i got to wear my raincoat and hat. he borrowed back the ring. as we approached one of the benches, there was some red velvet draped over it. hmmm, what is that? ben wondered aloud. why don't you see what's underneath it? i picked up the fabric to reveal a rose (the same one from the day before, which i'd left at his house). 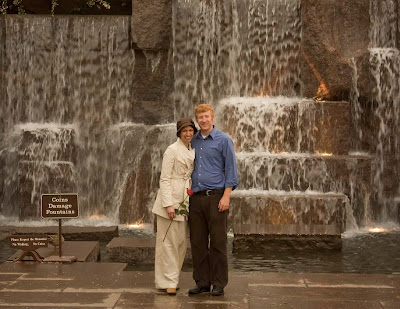 then he was on his knee again and this time there was a speech. a good one. and i said yes again. more hugging and kissing. and staring at the tidal basin. then we walked out as the strike force converged. sadly, we hadn't been able to find any water guns with which to attack them, so we settled for giving them the truth (that we'd been engaged for more than 24 hours) instead of a surprise soaking. i mean, they did do a rather good job keeping the park ranger and other people away from our spot. except for that one jogger. they took it like professionals. 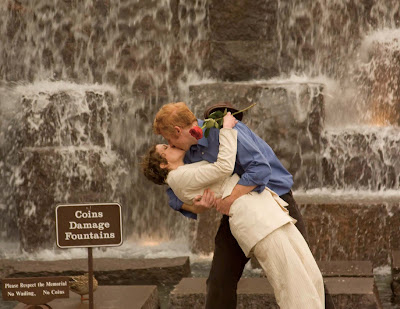 (he can by my chicken tikka masala any day. mmm-m!)
ben then took me to the restaurant of my choosing for a celebratory dinner. so with the sky as my limit, of course i chose the hole-in-the-wall indian buffet and loved me some chicken tikka masala. mmm-m.
*special thanks to strike force alpha
Posted by annie at 5:43 PM 15 comments: Links to this post