do you ever just want to be sad?

not because anything's wrong or terrible or troublesome, but just because?

like maybe you saw a commercial* for a board game that reminded you of your brother and you thought, i should get that for him for his birthday, and then you remembered that he can't play it and that you miss him?

i don't think the sadness of someone's death ever goes away. it's no longer the crippling sadness that that alternately kept me awake all night and then cringing from the world under the covers come daybreak, but it's still there. sharper and deeper in some ways, or maybe just clearer**, now that i understand it with 29-year-old wisdom instead of whatever passes for wisdom when you're 17-almost-18.

he'd have turned 31 last saturday - still so young. what would his life be like? would he be married? what would his kids be like? where would he live? what career would he have chosen for himself? would he have served our country in iraq or afghanistan? what would he have thought about that (because surely he'd have an opinion)? i worry that i'm forgetting too much. i think about him often, but only mention him in passing because it still has the ability to make my eyes fill no matter where i am - like in my office writing this post, but particularly if i'm doing something he would've loved like this. were he alive today, he'd have been out in front leading our expedition, running down side trails, winning the gallon challenge and generally leaving his own (infamous?) trail behind. like the time he won a contest by eating, legend has it, 12 raw eggs at scout camp.***

my memories become more and more shadowy and are replaced by the frozen pictures from various albums and i feel like this is a kind of betrayal, to myself and to him. curse my mortal memory that saves every exquisite detail of the night he died and the ensuing grief, but fades the sound of his laugh and what his hair looked like and the way his eyes looked when he was up to something. it makes my heart happy (and a little scared for his mother) how much this one reminds me of him, in both look and personality. so alike that grandma kept calling him alex at our last stimpson hoo-rah.

the connections between experience and people and how those things affect a person is the inspiration for much of my artwork. and so, i leave you with this, the artist statement that goes along with these, which i've probably posted before because they're among my favorites: 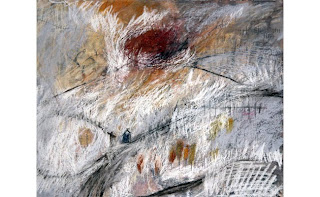 "she thought of the rain and fire and you"
and this one, too 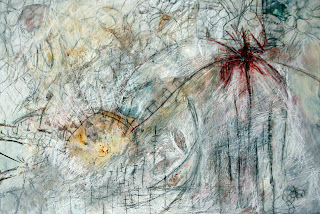 "the place with the fireflies"

*because you've been watching entirely too much tv lately...

**for those of you that read this, yes, this post was influenced by her. really i should just ditto what she said and call it good. dear little sister, you are younger in years than i am, but so much wiser.
***for the record, it wasn't that many, but as he said, let the tale-bearers tell their tales...
Posted by annie at 9:42 AM

Beautiful, Annie. You girls'd better quit makin' me cry! I love your poem, too. You have a wonderful way with words. And the artwork is such a treat to see, so post as much of it as often as you like.

I love you Annie.
-Aut

that's a great picture of max and i forgot how grandma kept calling him alex. so funny.

p.s. mine was inspired by moms. therapeutic isn't it?

Thanks for that. I always say my sister would have been sooo much better looking than me, super talented but I'd be the bestest sister a girl could have.... *sigh*

Beautiful post, Annie. And beautiful artwork. I'm grateful for all three posts about Alex that I got to read this week and the memories they brought back.

That is beautiful, Annie. You've captured everything I've felt about losing a loved one, too. Sometimes I sit and just and try to remember, and it sadly becomes harder with each passing year. Thanks for the post. :)

I have not lost a sibling, so I do not claim to understand your particular grief, but I lost a friend, tragically, traumatically, unexpectedly, almost literally out of my arms when I was 21, and grief is the hardest emotion to articulate clearly, without sounding like wallowing, but still feeling like *feeling.*